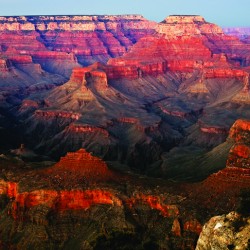 If you imagine Arizona as a desert and scrubland, with only the occasional huge cactus dotted over an arid landscape – be prepared for a big surprise! In fact in the USA’s sixth largest State, the terrain varies from desert to alpine, there’s an abundance of trees and plants…and more than 60% of all types of wildlife species to be found in North America! Arizona’s unique geological formations culminate in the awesome Grand Canyon, rising majestically above the Colorado River. Monument Valley has provided a natural setting for many western films and visits to these sites, the ancient Indian ruins at Canyon de Chelly, the spectacular Red Rock country around Sedona and the huge meteorite crater near Winslow should all be included in your itinerary. Rich in frontierland folklaw, homeland of the Apaches and Tombstone, scene of the gunfight at the OK Corral, these and many milestones of memory are to be discovered in colourful Arizona.

A stunning 3,000-acre Spanish-style ranch, with lush desert adjacent to the Saguaro National Park, where dramatic scenes from “High Chaparral” were shot. This charming, informal ranch gives you a real feeling of the Old West and the informality is blended perfectly with the comforts of a top res...more >>>

The oldest ranch in Arizona, founded in 1868, nestles at the foothills of the colourful Tanque Verde Mountain. Its Eastern border is part of the 14,000 acre Coronado National Forest and its South side runs along the huge Saguaro National Park.Tanque Verde Ranch offers the very best of a Southwestern...more >>>

This family owned ranch is perfectly located for seeing the great sights in Arizona/Nevada; it’s just off the Historic Route 66 and is within 3.5 hours from the Grand Canyon and just over 2 hours from Las Vegas....more >>>

This unique guest ranch is situated amidst ancient bolder formations, opposite the Dragoon Mountains. With the looks of an 1880’s Western frontier town it is only 3 miles outside of Historic Tombstone (made famous by the gun fight at the OK Corral) located in the heart of Cochise County, Arizona....more >>>

Rancho de la Osa is a sportsman’s paradise and one of the most historic properties in the west. Situated on 590 acres and surrounded by an additional 120,000 acres of National Wildlife Refuge, the ranch is located high in the Sonoran Desert and close to the Mexican Border. Saddle up for a scenic h...more >>>

Kay El Bar Ranch is an intimate, historic guest ranch in the heart of the Wild West in the Sonoran Desert, in the shadow of the Hassayampa River Canyon Wilderness. Nearby Hassayampa Hill offers desert vistas and unforgettable sunsets. Only a little over 1 hour northwest of Phoenix, it is a great sto...more >>> 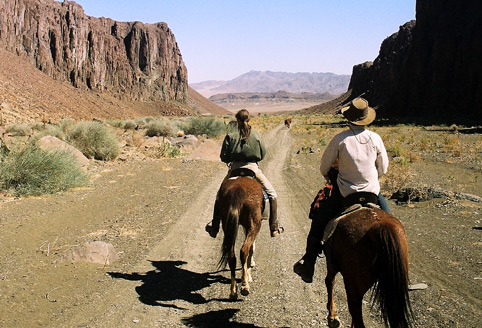